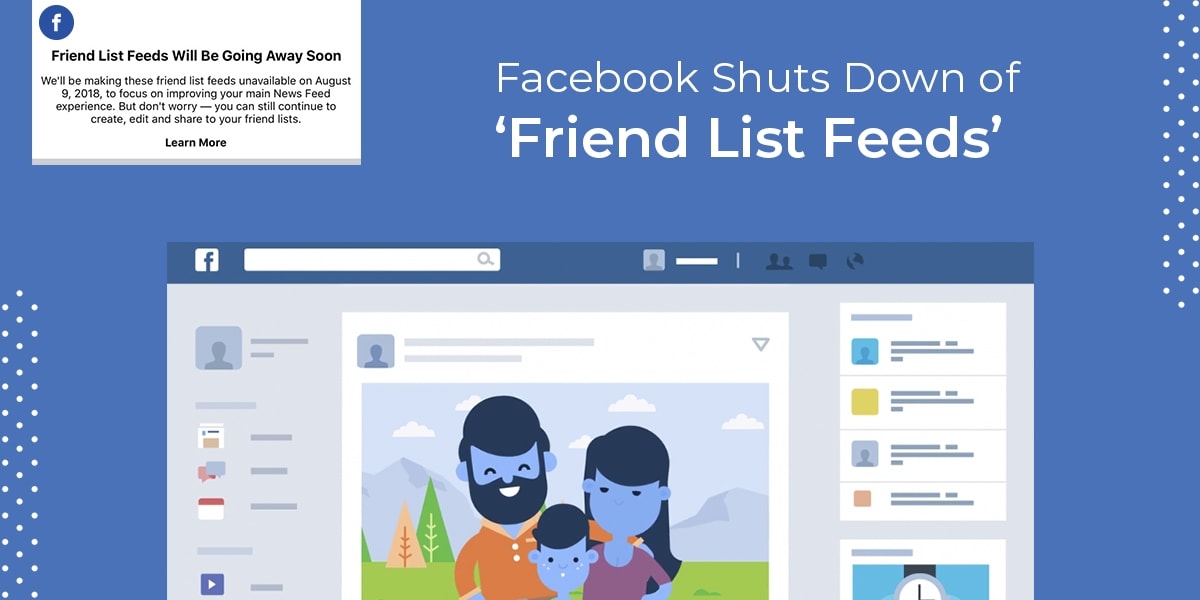 From having Facebook groups to adding pictures and videos, there is so much to do on the platform, right?

So, there is simply not a speck of doubt when we say that using Facebook is simply the best thing ever. We would also like to think that you will agree to it.

Did you know this? About 1.66 billion people are on the platform of Facebook on a daily basis. 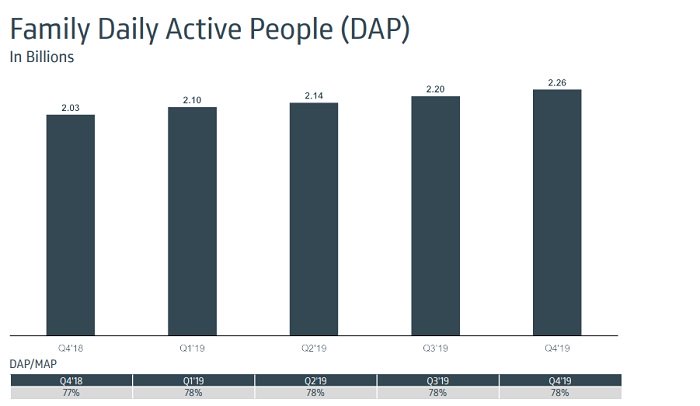 It can be said that Facebook has defined social media in the best way. From people to brands, everyone is literally on the platform. But why do you think there is a craze for the platform so much. The reason would be that there are so many people who want to experience the best and only Facebook can provide that.

However, the platform is not devoid of mistakes and we are here to tell you about one of them. Being a work in progress, Facebook always comes up with new and interesting features and updates that people would love Or at least that is something that they think they do. The truth of the matter is some decisions are right and some don’t go as planned.

The Friend list feeds feature on the Facebook platform was one of the latter decisions taken by the company. Well, the news here is that Facebook has officially shut down the Friend List Feed feature, Do you not know what we are talking about in here?

Well, in that case, you need to read each and everything pretty carefully to know what we are saying in here. 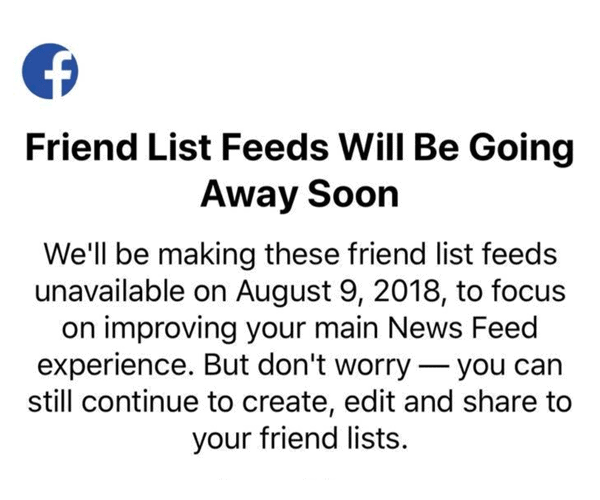 It indeed came off as a surprise when Facebook decided to shut down the feature for the Friend List Feed. The announcement said that the feature will not be available starting from the 9th of August. Now that was a piece of pretty hard news for some of the people who used the platform of Facebook.

Do you have an idea of what the Newsfeed on the Facebook platform is? If not then you have come to the right place as we are going to have a little chat about it right here. Well, the news feed section is the page where people can see updates that are posted on the platform of Facebook.

There is no doubt that it is definitely one of the best features that people could have had. After all, everyone wants to know what is going around everywhere, right?

With the help of this feature, they could see the news updates and everything that has been going on in other’s lives. We bet you have seen the News Feed as well.

We bet you didn’t know this fact. About 51% of the Millenials can’t really go 5 hours without checking on their Facebook Newsfeed.

So, there is no doubt that the popularity of the News Feed on Facebook was experiencing an all-time high for sure.

However, Facebook took a step further when it said that people would be able to see the updates of the ones who they want to. Also, they could avoid the news feed of people that they don’t want to know about. Now, doesn’t that seem like such an amazing thing people? 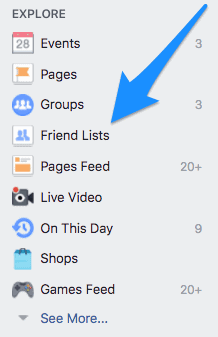 Well, after hearing so much about Facebook Newsfeeds, we are pretty sure that you want some more. That is why we are here to give you all the information that you want to have for sure. Can you imagine a platform where you can see the News Updates that you want to see and actually avoid the others?

That is exactly what this Friend List feed feature was on Facebook. The function was basically designed in order to make sure that the news feed was modified in a more personal way.

This would enable you to catch up on all the updates which you think are important. You don’t have to see the other feeds which otherwise form a clutter on your Facebook Wall.

We bet now you want to know how to do that in the first place. So, in order to make sure that you are able to access the Friend List feeds, you have to keep some things in mind.

First of all, you need to go to the section that says ‘Feeds’. It is available on the application of Facebook and also the desktop version as well. There you will be able to see a list of all the feeds. 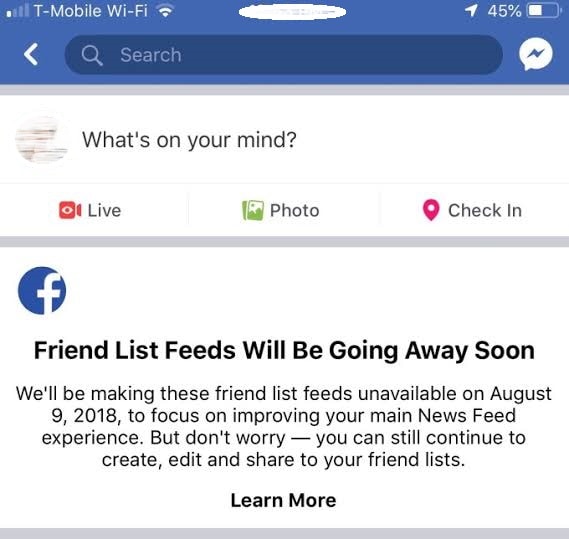 You can then easily have the feeds available to you on the basis of the friend list of yours. Now doesn’t that seem like something interesting and something that you would want to do? Well, this list was on the platform of Facebook for a very long time now.

To be honest, there are some people who used it as well. However, the original version of the feature actually demanded that the users would make the list.

They needed to create the lists and then select their friends manually by going through the options and names. That surely made the process a lot longer and more tedious as well.

With more creation of the lists, people had to keep in mind that they needed to add more people to the lists as well. While it seemed more appealing at the time, there were not many people who were thrilled with the idea.

So, there is no doubt that the feature didn’t really work for the company as planned. As a result, the effort didn’t really have the results that were expected from it.

However, the story didn’t end here. Do you want to know the rest of it? Well, you have to make sure that you are reading each and everything carefully to know what we are talking about here.

There was even an attempt that was made by Facebook to improvise this feature of theirs. Well, now you must be wondering what it was? There was another feature added which was known as the Smart Lists. This was the list that would automatically group all the friends of the people. How is that possible, you ask?

The platform did that on the basis of the characteristics that they had.

These were some of the changes that were made to the feature. All of this was done in order to make sure that people realized the importance and worth of the feature. The users didn’t really have to make an effort in creating the lists. That would have made things far simpler for sure.

However, there was some bad news for the company because this scheme also didn’t provide the results that they were looking for.

So, it was made clear after some time that the feature will not be available to the people anymore. This is because it became a less important feature and people didn’t have any interest in it as well. So, there was a change made and the feature was taken down after some time.

This was done in order to improve the experience of the people who are on the platform of Facebook. However, this was not the end of the Friend List as it was still there.

Now you might not be able to see the custom feeds which are present on the list of your friends, but you could still create the lists and edit them as well. Also, there is an amazing option that is provided to you for sharing the News Feeds to the audience as well.

Not to mention that users will also be able to ensure that they can easily hide the posts on Facebook that they don’t want to see. After doing that, the posts will not appear on the Facebook News Feed of theirs.

Facebook might have shut down the Friend List Feeds option a while back it is still trying to improve the experience of its customers in the best way. With more and more features in line, there is no doubt that Facebook will continue to provide many benefits to people in the best way.