You must have seen that viral memes contain images from popular videos or movies. Youtube is a great source of getting those images. Here in this blog, we have shared some very useful and interesting methods of taking screenshots from Youtube videos. Let's begin! 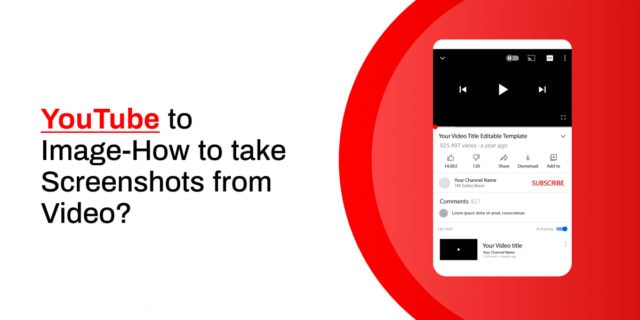 How to take Screenshots from Video:- Probably like a lot of other people, you also find something interesting in the video and take a screenshot. But how does it work? It’s simple; the answer is easier than you think.

The problem is, most people don’t know how to capture individual frames from videos — and that’s what we’re going to show you how to do today.

There could be many reasons on why you may need to take a screenshot from a YouTube video. One of the reasons could be you liked a specific part of the video which you need to share with your friends.

If you’re looking for an easy way to pull images from movies or video clips, read on. We’ll show you how it’s done.

What is a screenshot? 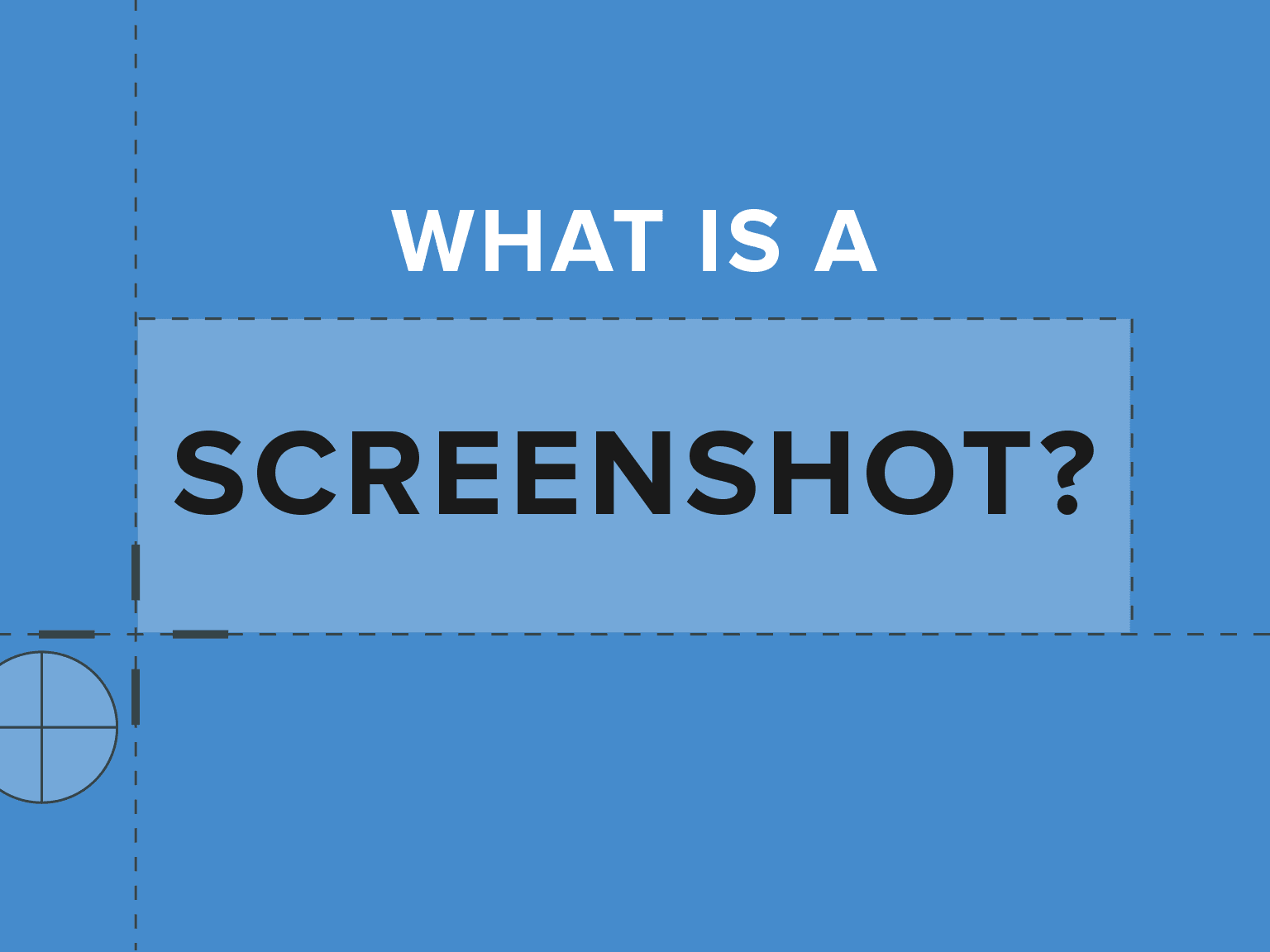 A screenshot is a digital image that the computer has captured. It is an electronic copy of an image or video.

Screenshots can be used in many ways, such as OS notifications, sharing images on social media, and even creating memes. The use of screenshots has become widespread in recent years. They are used to document events and progress in software development, marketing campaigns, and much more.

What are the Different Ways You Can Take a Screenshot?

With so many forms of technology available in the modern-day world, it isn’t easy to find out how you can take a screenshot. Therefore, we aim to bring out all the possible ways in which you could take a screenshot on your phone or computer.

Some methods require more technical knowledge than others, and some may be better in one situation but less effective in another.

The following are the most common methods used to take screenshots:

How to Take Screenshots from Video by Using the VLC Media Player? 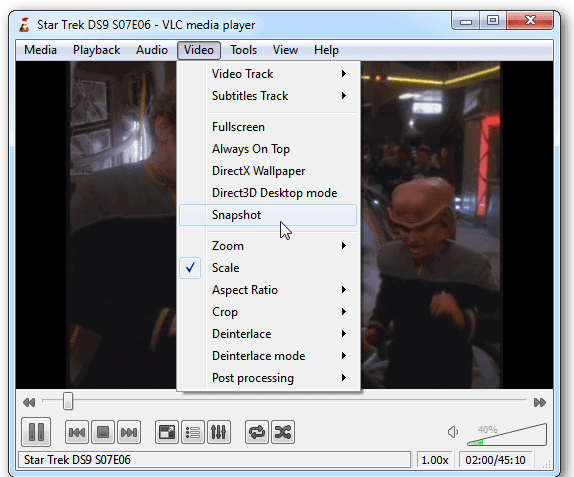 VLC Media Player is a free and open-source cross-platform multimedia player and media framework. This article will show you how to take screenshots from video by using the VLC Media Player.

Step 1: Open VLC Media Player and go to the video you want to take screenshots from.

Step 2: Click on the “Media” tab on the top left corner of the screen, then click on “Screenshots” in the drop-down menu. Next, select the folder where you want to save your screenshot files.

The process for capturing a screenshot from YouTube for Mac OS X users is different from the one for Windows users.

Step 1: Open YouTube and set the video to full screen.

Step 2: Hit Command+Shift+4 from your keyboard to open the four-finger screenshot tool. 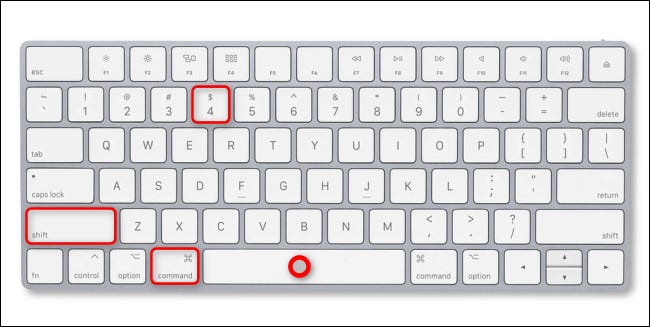 Step 3: Click and drag with your mouse while holding down the keys to capture a screenshot.

This first technique involves capturing pictures from YouTube videos with Print Screen (usually called PrtSc on the keyboard). Check below:

Step 1: Begin by playing the YouTube video. To capture a screen on YouTube, just hit the PrtSc key. Then the whole screen will be captured, so you’d best watch the full-screen mode YouTube video.

Step 3- To save the screenshot to your computer, right-click on it and select Save it as an image.

If you’re not interested in capturing the whole screen, consider using YouTubeScreenshot.com It’s a simple-to-use tool for taking screenshots of YouTube videos. 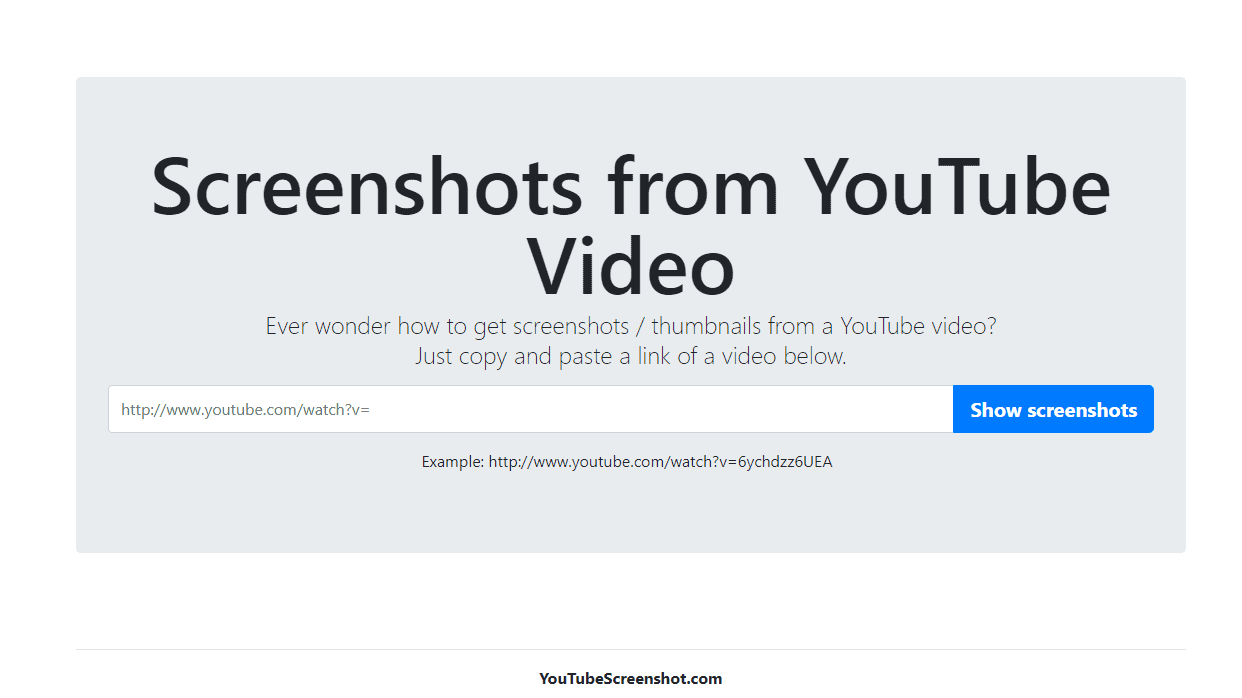 Step 2- Scroll to the bottom of the page and click to start the YouTube video. Then, drag the cursor to the desired location and click take the screenshot. As seen in the YouTube screenshot, right-click on it and select Save picture as… to save it.

Thirdly, you may use a YouTube screenshot add-on. It’s the greatest method for taking screenshots on YouTube since it enables you to capture screenshots while viewing videos. 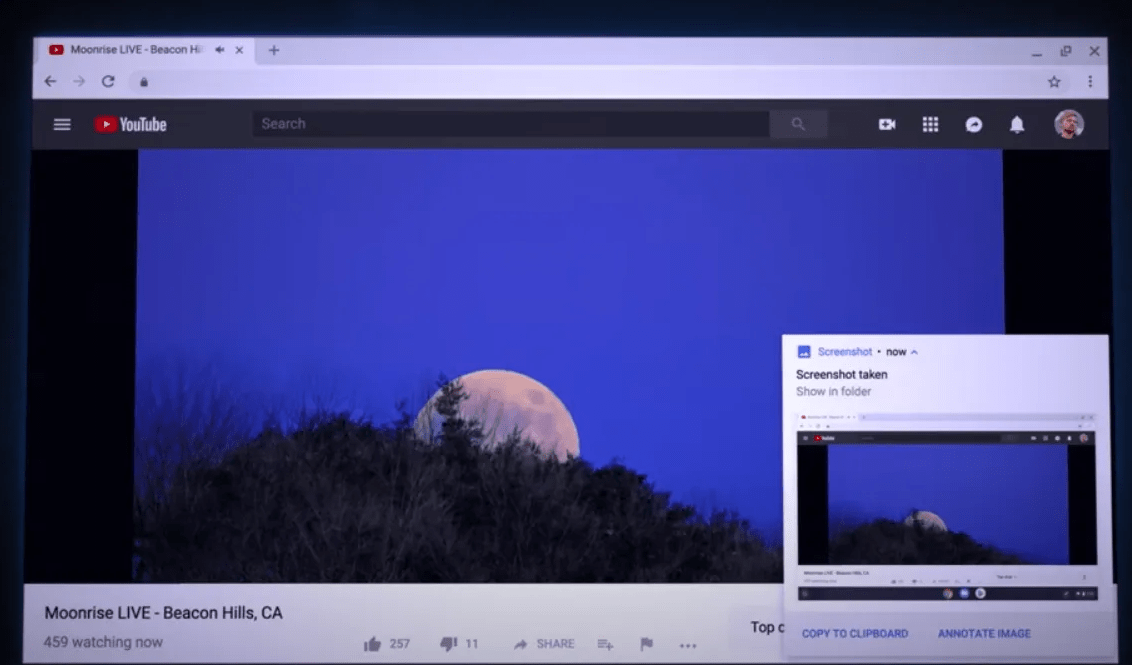 Step 3– Navigate to the YouTube video for which you want to capture screenshots.

Step 4– To begin watching this movie, click on it and look for the Screenshot option in the bottom right corner. When you’re ready to take the current picture, touch on this button.

Step 5- By default, the target folder is checked. Go to This PC > Downloads to locate the YouTube screenshot. After that, you’ll see the screenshots you just captured.

How to take a screenshot from a video using Windows 10

This tutorial will show you how to take a screenshot from a video using Windows 10. It is very easy to do in many other operating systems like macOS and Linux.

Windows 10 users need to go through the following steps:

After taking a video screenshot, it is good to crop the screenshot to be clear and concise. You can do by highlighting the screenshot with the mouse once the video is played. Finally, you can edit your shortcut using Paint or any other editing software on your computer.

There are many apps & software that you can use to take your screenshot from a video. The most common apps include QuickTime, iMovie, and Camtasia. These apps are simple and easy to use, but there are also more advanced options that you could be interested in.

For example, if you want to take a screenshot from a video for social media purposes, you will need the app called Pixlr or Snapseed. With these two apps, you can edit the image as much as possible by adjusting the color and adding filters.

The Most Popular Apps

The most famous third-party apps that can take screenshots are Snagit and Screencast. They both have free versions and paid versions as well. If you need to take screenshots on your phone, try the Google Photos app or the iPhone built-in screenshot feature.

To take screenshots of a video, Chrome has an extension called “Screencastify,” which allows users to take a screenshot while playing a video.

The Screencastify extension allows you to record any part of the window, including web pages. It allows you to add annotations to videos with images and text. You can also record video directly from your webcam or microphone and record audio from speakers or earphones.

It’s not just limited to screen recordings, though; it has an option for recording gameplay too!

Capture from Your Computer’s Graphics Card

If you’re playing the game on Steam, then you can take a snapshot of what’s on your screen by using the screenshot function included in Steam’s interface. To capture a screenshot, use the “F12” key on your keyboard. 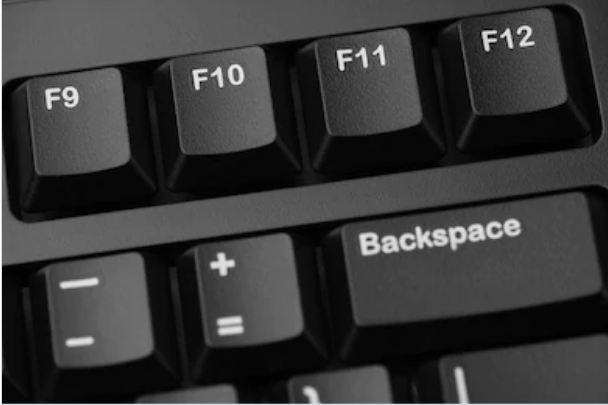 You’ll hear a click sound and get a notice in the lower right corner of the screen that says, “Screenshot saved.”

Capture from Your Phone’s Camera Roll

You can use any number of methods to capture a screenshot. You need to tap the home button or power button on your phone and simultaneously press the volume up and volume down buttons.

If your phone doesn’t have a home button, you can also place two fingers on the screen and then quickly swipe up. However, it depends on your phone’s gesture setting. It will take a screenshot of whatever is currently being displayed.

Capture from Apps on Your TV or Monitor 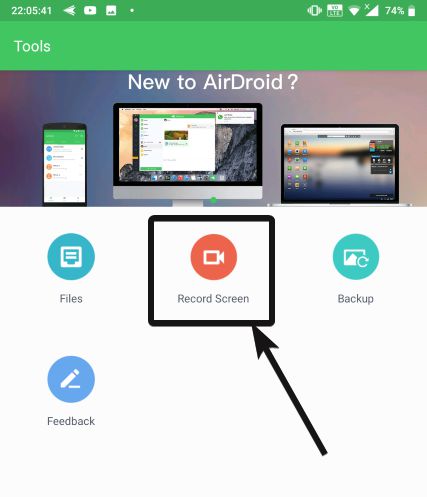 Capturing a screenshot of a video from an app on your TV or monitor into your phone is easy with the use of the remote’s capture button. It is where apps like Screenshot, AirDroid, and Mobogenie come into play.

You can download these apps on your device for free. They allow you to take screenshots of videos on your TV using your smartphone. The use of AI assistants such as Cortana, Alexa, or Siri in smart speakers might also simplify this process.

As mentioned above, there are different tools to take screenshots from YouTube. You can download any of these tools and use them for the screenshot purpose. 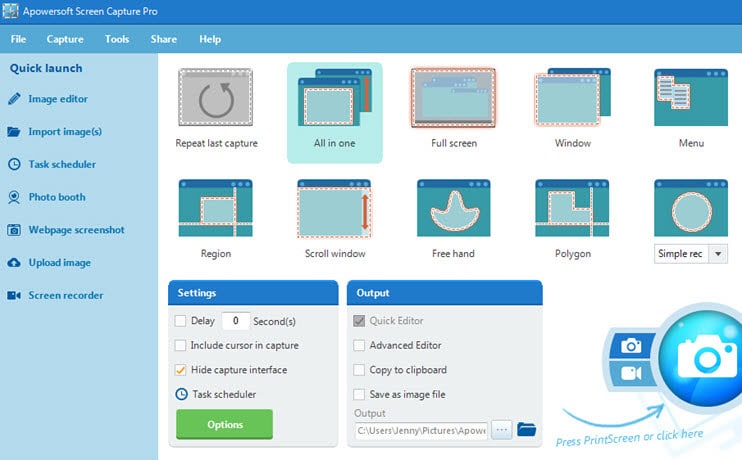 Apowersoft Screen Capture Pro is the most powerful screenshot capture tool that allows users to capture from any region of the screen. The tool comes with both a quick editor and an advanced editor. The former allows annotating the screenshot upon creating it on the screen.

The latter allows more sophisticated editing to be graph. The tool also has an automatic screenshots feature with its “Task scheduler” function. That will be useful to take multiple YouTube video screenshots. For YouTube videos, you can use the “Screen recorder” function.

FastStone Capture allows users to grab screenshots and perform video capture. The tool is apt for capturing images from your YouTube videos, and it provides a variety of screenshot shapes as options. The tool supports JPEG, GIF, PCX, TGA, TIFF, and other formats. 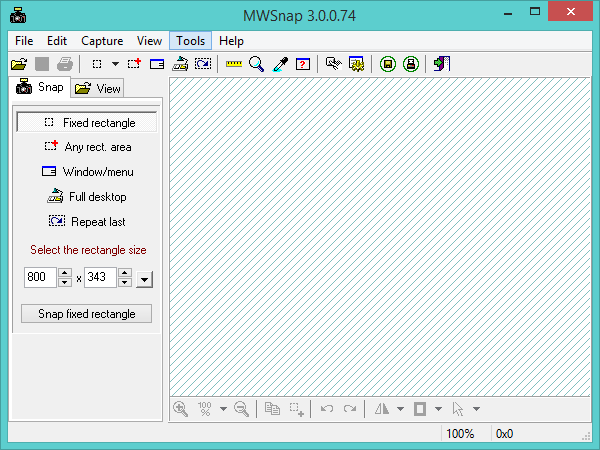 This small Windows program allows capturing any area of the screen. The MWSnap tool is capable of capturing the screenshot of the whole desktop and active menu. You can use the tool to view pictures and convert pictures’ formats.

Screenshots are an effective way to document your work and capture the moment to save it. Hopefully, the ways discussed above may have helped you understand the various options you have regarding taking video screenshots.